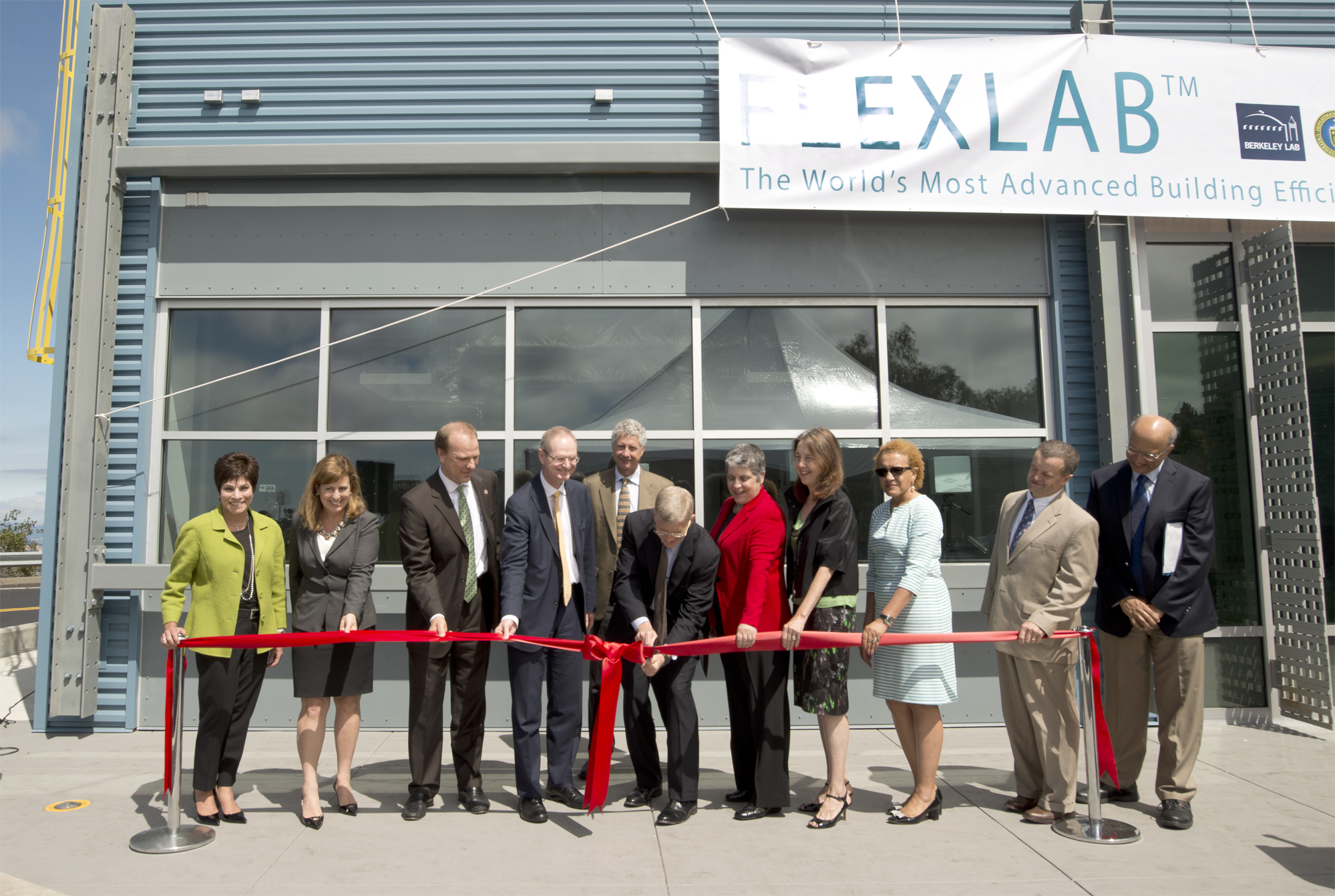 The world’s most advanced energy efficiency test bed for buildings is open for business, launched today by U.S. Department of Energy Deputy Secretary Daniel Poneman. DOE’s FLEXLAB® at Lawrence Berkeley National Laboratory (Berkeley Lab) is already signing up companies determined to reduce their energy use by testing and deploying the most energy efficient technologies as integrated systems under real-world conditions. The facility includes a rotating test bed to track and test sun exposure impacts, and other high-tech features.

“In the United States, nearly 40 percent of all energy and over two-thirds of all electricity consumed goes to operate commercial, industrial and residential buildings,” said Deputy Secretary Daniel Poneman. “To power these buildings, Americans spend more than $400 billion every year. By making buildings more energy efficient, we can save money by saving energy and drive the nation to our low-carbon future.”

“So far, Berkeley Lab’s energy efficiency work has saved American families, businesses, and institutions many billions of dollars in energy bills. If all goes as planned, FLEXLAB – the first of its kind test bed designed to enable much more aggressive whole building energy savings – will add to that impressive tab,” said Berkeley Lab Director Paul Alivisatos.

“Berkeley Lab is already a global leader in smart-building innovations that are helping our nation cut greenhouse gas emissions,” said Napolitano, president of the University of California, which manages Berkeley Lab for the U.S. Department of Energy. “FLEXLAB will allow us to cut building emissions even further, and lessons learned here will be instrumental in helping UC reach its carbon neutrality goal by 2025.”

In the first test bed experiment, leading biotech company Genentech is leveraging FLEXLAB to test systems for a new building at their South San Francisco headquarters.

“At Genentech, we are constantly innovating and following the science, so we were excited to apply this approach to energy efficiency and building optimization,” said Carla Boragno, Genentech Vice President for Site Services. “FLEXLAB represents a new type of experiment for us, and presents the opportunity to be first-in-class in another area of innovation. We are proud to be the leading client of FLEXLAB.”

PG&E is next in line to use the facility to test the next generation of technologies – those that focus on whole building systems – for emerging technologies incentive programs.

PG&E is working with an advisory committee to identify system-scale efficiency improvements that make best sense for most businesses. It is testing alternatives in FLEXLAB, starting with innovations in building envelopes, lighting and shading.

“Compared to the usual ‘widget’ approach of offering incentives for single pieces of equipment, utilities are finding the next generation of energy efficiency technology – which includes single or multiple integrated building systems – is an order of magnitude more complex. FLEXLAB will help them get a handle on this,” said FLEXLAB Executive Manager Cindy Regnier. “And that opens the door to new and renovated buildings that are dramatically more energy efficient.”

“We are running tests and gathering data that will allow us to maximize the Genentech building’s energy-efficiency potential,” said Webcor CEO Jes Pederson. “FLEXLAB could revolutionize the way we plan and build energy-efficient buildings.”

Recognizing that building inefficiency is a critical obstacle to achieving U.S. clean energy and emissions goals, DOE issued a Request for Proposal in 2009 for a new kind of testing facility to address the challenges buildings face in achieving deeper levels of energy savings. Many buildings are designed to be energy efficient, but once they are up and running, can use a lot more energy than planned. To close that achievement gap and accelerate breakthrough technologies, Berkeley Lab competed and won the $15.9 million contract to build FLEXLAB, a testament to the Lab’s long history of energy efficiency innovations.

FLEXLAB is a testing ground for developing new, energy-efficient and low-carbon building technologies. Berkeley Lab and its utility and private sector partners will identify, test and measure technologies of the future that will help California and the world move to a cleaner, more efficient energy future.